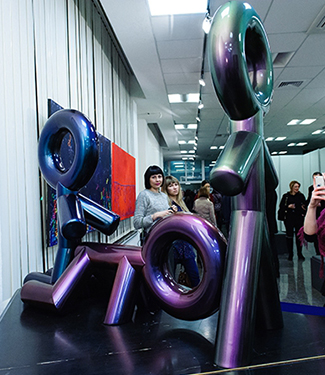 "Within the framework of the "Ukraine-Latvian dialogue" project the opening of the solo exhibition of Lina Kondes "POTPOURRI"was held. The exhibition represented “a musical play" composed of fragments of various well-known "melodies". In the exhibition a series of paintings is presented demonstrating the relationships of bachelors, poisoned with thoughts about the unreasonableness of marriage. The same theme was emphasized by a polychrome sculpture named «Dominant» against the background of monumental paintings. The exhibition presented 18 Lina Kondes’ paintings created during the years 2010-2015. Also, Lina Kondes’ first catalog of works was presented at the exhibition.